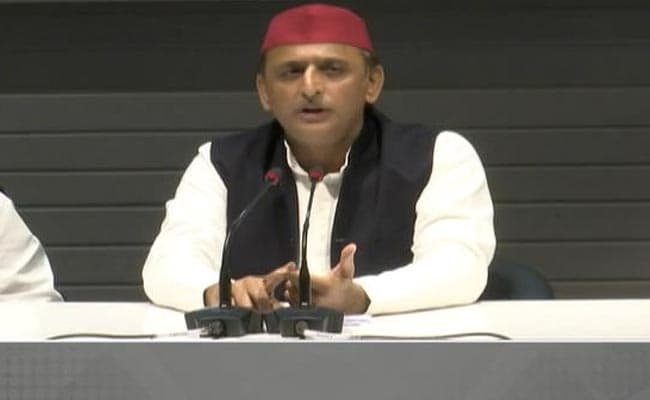 Akhilesh Yadav said that the Modi government cannot be trusted, they can bring back the law after the elections.

After Prime Minister Narendra Modi announced the withdrawal of three controversial agriculture laws that have led farmers to protest on the road for over a year, Uttar Pradesh received a storm of “thank you” tweets from BJP leaders.

“You must have heard the Prime Minister’s address where he announced the repeal of agricultural laws against which the unions were agitating. These laws were in the interest of the country but the voices against it could not be ignored. We need to talk it out. Will have to be solved through medium. Dialogue is the biggest strength of democracy and PM should be thanked for this: Uttar Pradesh Chief Minister Yogi Adityanath tweeted.

This morning, in a surprising address to the nation, PM Modi said: “Apologizing to the nation, I want to say with a sincere and pure heart that perhaps there was some deficiency in our tapasya (surrender) which we could not explain. Our The truth for some farmer brothers, clear as the light of a lamp. But today is the festival of lights, no time to blame anyone. Today I want to tell the nation that we have decided to repeal three agriculture laws. “

Thousands of farmers from states like UP, Punjab, Haryana and Rajasthan have been camping outside Delhi since November 2020 to protest against the laws.

The BJP is hopeful of change as it faces unprecedented anger in UP, especially in western Uttar Pradesh, where farmers are an important block.

Anger erupted after the Lakhimpur Kheri violence, in which four farmers were crushed by an SUV allegedly driven by Ashish Mishra, son of Union Minister Ajay Mishra.

Samajwadi Party chief and former chief minister Akhilesh Yadav, who has emerged as a major challenger to the BJP in UP, said the Modi government cannot be trusted, that they can bring back the law after the elections. “These people think that this fake apology will return them to power but people understand all this. Laws have been repealed for votes. How will the Lakhimpur killers be brought to justice,” he said.

The Samajwadi Party’s alliance with Jayant Choudhary’s Rashtriya Lok Dal (RLD) is expected to do well in western UP, which has around 100 assembly seats and where the BJP won over 70 seats in the 2017 elections. There have been reports of a renewal of Jat-Muslim unity in a region that was shattered after the 2013 riots in Muzaffarnagar.

“I will make the farmers clear these elections. Farmers are not the priority – votes are the priority of the BJP,” Yadav told reporters.

Priyanka Gandhi Vadra, who is managing the Congress campaign in Uttar Pradesh, said the PM was forced to step down only because of the elections.

“Seeing him, I thought of the family of Daljit Singh, one of the farmers who died. I wondered what they were thinking – the son of a minister in the Modi government crushed them, the family must have been thinking that PM never came visit him, ministers still share stage with PM, and PM is apologizing today? are doing,” Priyanka Gandhi told reporters.

He said, ‘Who will trust the intention of the Prime Minister? Everything is clear in front of the country. If the government was serious, then appropriate action would have been taken on Lakhimpur.

Asked whether the opposition will now have to rethink its strategy for western UP, the Congress leader said: “I think there is no one more intelligent than a farmer in this country. They see and feel everything and No one should doubt his ability and ability to understand. Understand what is happening.”

Maintaining Uttar Pradesh is crucial for the BJP to justify the biggest policy reversal of PM Modi since he came to power in 2014.

The UP election will test all parties ahead of the 2024 national election.

According to reports, the BJP’s internal survey gave dire results and acted as a reality check for the party in the sweeping elections in UP since 2014. The party is worried that the farmers’ movement will take its position down this time.

The anger is so deep that BJP leaders, including MLAs, were “banned” by villagers in many areas.

Additionally, the alleged consolidation of Jat and Muslim votes in western UP is also a challenge for the BJP, which has been enhanced by the Samajwadi Party-Rashtriya Lok Dal alliance. You have been hacked: how did the ruler of Dubai talk to the ex-wife?